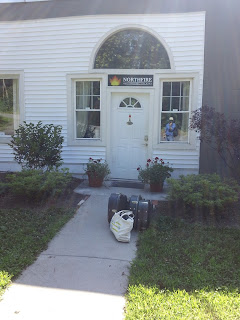 Took a song just written as result of a songwriting collaboration started in a songwriting workshop over Skype. Perhaps more on that in a future blog post. Suffice it to say, I got fortunate to end up getting to do a trial collaboration with an extremely talented singer/songwriter/composer and we developed  one of her many great musical and lyrical ideas--this one has such a ninja chorus it was sitting there saying, would you write me already, what do you want, a formal invitation? So I wrote some verses working off her title, "Mark Twain" and the next thing I heard was a clicking sound I now recognize as the activation switch for my actual voice actually finding itself.

Northfire Recording Studio is a sweet little place, but they do some seriously great work there. Artists come from far and wide to record. If Emily Dickinson were alive today, I'm sure that not only would she be writing and recording songs, but that this would be her studio, not only because she could walk over from her house but because it would respect her need for a room of her own.

I was there to do just this one song.
How long do you think it takes to do one song--a 5 minute song?

Got out at 5. Seven Hours, liquid protein in grape juice was lunch, during a microphone set up.
Actually, Reed's liquid bass line was what really kept me going.

Came equipped with three guitars, a ukelele and bag of percussion instruments and a page of lyrics. Even though I have many unrecorded songs, some of them I thought at the time were the one to spend a day on, I wanted to see what would happen if I took an inspired idea and stood at the edge of a cliff in the canyon with a glider and took a jump. With nothing assured, I wanted to do something better than I ever did it before and even though there's nothing wrong with taking something proven and making it better, I wanted to take the story of Mark Twain's life as material for a song--how he notes the foibles of mankind while also being hopeful enough to love the human race. He seems to be able to convey that  the collective story of humans is tragic and the personal story of each person is ultimately tragic--except  that it isn't. Humanity is redeemed some, even in its barbarity, through its art, and on the individual level, people are redeemed even in terrible loss, through love. Anyway, that's my take on Twain. I wanted to feel that, and convey give some of the flavor of his message. It ended up somehow overlapping with the process of playing with these big sounds. I wanted to put myself in the role of being the middle point connecting my good friend (in my imagination, musically) Elvis Costello, to my good friend (language-istically) Mark Twain. I just knew they'd like each other, as I like them both so much.

Did I mention how encouraging and masterful Marc Seedorf is as a session engineer? While being all about getting things ready, about moving calmly and constantly toward any possibilities being invited, I'd get a impulse, and he'd say, let's do it. He knew any of these passing things was important to the freedom to let something be what it needed to be. For example, when we were mixing the editing, I heard him isolate the vocal. He was cleaning it up, finding the pops between the places where we had punched in a re-do of a note or line. Even though we put a fair amount of effort into constructing a smooth instrumental ending to the song, I realized that the best ending was what I just heard by accident, the isolated vocal track saying, "always believed" stripped off all the 11 other tracks we had carefully been building up all this time.  It had been a long day. We had put in a lot of work. He understood what I was asking for, and we threw out the old ending he'd been crafting for 20 minutes and made a new one and it really helped make the song, and it was his willingness to instantly see that is how it could happen in the first place and I could invite my intuition out. He made it possible to do that. It's a little bit like getting a wild horse or deer to stick around through being patience itself.

Marc finished his mixing and cleaned it up, removing stray hair, hairy frequencies and getting it ready to be heard, and while I was doing a final listen to check the sound levels, I was sitting in the control room with a clipboard, holding a pencil as tears rolled out of my eyes. Sometimes someone will say, "I was crying for joy." That wasn't it. It wasn't as simple as crying for joy. I was crying for the resonance the big sound from the studio speakers was making with something that was suddenly awake and present in the room finally having a way to manifest itself, sharably in the world. There was happiness in it though, it sounded just as tremendous as my heroes. "I'm Aimee Mann!" I said, if you know what I mean. And you might not know what I mean, so I'll say it more plainly. The sonic richness, the clean sound of built emotional melody that is so miraculous that it makes you hold your breath for a second when on her record, it was coming out of what I had just watched myself do for 7 hours. It was cut from the very same cloth. It had to have come from me. I was going to have to change my idea of who I was.  Somehow, I think I'm going to have to take this in. This is now what I know how to sound like.

Could see the summer sunlight to the outdoors through the window in the control room, and even from the main recording room, but was not prepared for how bright the sunshine was of a 90 degree July day re-entering the world but carrying this new sound in me now.

Watch for "Mark Twain", coming soon to iTunes when it's good n' ready to.
Posted by Michael Silverstone at 6:06 AM