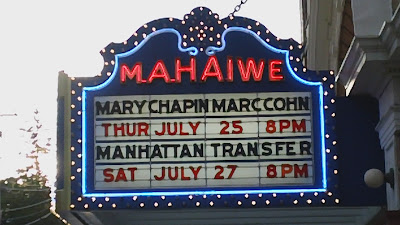 I went to hear my friend Marc do a concert with Mary Chapin Carpenter at a beautiful old theater in Great Barrington, MA. I only decided to go, a few days ago when I looked up what he was doing on tour. I haven't seen him in a few years. And usually I wait until he comes right to Northampton, but that isn't happening this year, and the 15 dates  he's doing with Mary are really special in that they are doing each others songs together. Mary is being inducted this year into the Nashiville Songwriter's Hall of Fame, only the 15th woman to get in, and Marc is her presenter.

When Marc puts me on the guest list, he'll sometimes do something really special that I don't expect. When I went to pick up the ticket, it turned out that it was in one of the balcony boxes. 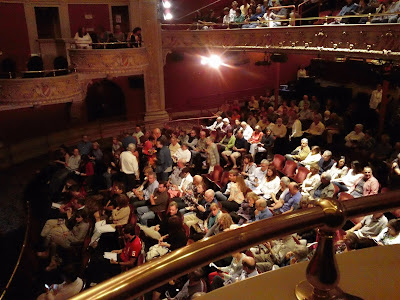 All by myself like the the King of Norway, until I got joined by a really nice musician friend of Marc's keyboard guy Glenn.  I never sat in one of those before. It was just really great, because I felt so included in the night, like I could just soak it all in. And I was by myself with my notebook propped on the ledge, taking notes on Mary's songs, she has some great ones of course. My favorite was was probably "This Shirt" --one where every verse was about about this shirt that she'd had with silver buttons that had been all over her life with her, and where it had gone travel and hardships and leaning her head on a window going through France and one the beach when she was there with some guy she loved who is of course all nostalgia at this point, just raising the power of the magic of the shirt.

It was an exquisite concert, from the both of them individually, and from them together backing up or taking over the others' songs.. At the end, they sang these songs they'd sung in Central Park in a benefit concert a few weeks earlier. They sang these songs from the classics, "The Wee Small Hours of the Morning" done by Mary, and then Moon River by Marc (oh such a beautiful, nimble soulful, expressive voice. It moved grown men to tears--at least one. ) And after the first go through of the song, Mary asked the audience if they felt like singing. Of course, I wanted nothing more. And those of us that wanted to as a communal choir of gratitude to the two of them and to being part of this community, while Marc and Mary sat back, and listened, and I just sang it real quiet and gentle with all the other people, and it was heaven, just heaven. So nice to make music after hearing it. And there were a lot of great singers there, because the two of them are songwriters' songwriters with great voices, so they attract like. What a great ending to a great night. I felt re-re-re reborn to life, really.

So I went to the meet and greet in the front lobby and met Marc' tour manager Tom, and his producer accompanyist and longtime friend John Leventhal in the lobby hallway. Among the recordings he was signing was an EP with live versions of songs from his last album, and it leads off with Live Out the String, which I just heard in the car as I was returning to the driveway of the house where the kitchen table sits where I wrote the letter to him that he used as lyrics. Big cheering sound at the end. So nice.

The other thing that happened, that I was excited about on the way to the theater I went to the Woody Guthrie family museum (in the Alice's Restaurant Church, "just a half a mile from the railroad track") and met a guy there with a guitar, and we went on the porch and played. He was great, and happened to have three guitars with him including a Gibson J-45 (the John Lennon guitar) and we traded off songs to play in you name one, and I'll name one fashion, and I had a lead sheet in my case for my newest song (48 hours old) "Didn't Wanna Stop Myself" (I didn't stop myself)  so we started with that, and it totally clicked for me in accoustic version, and he played great lead, like jeez I wanted to go right to a studio with him, but at least we traded cards, and I probably will see this guy again.

I was so glad to see Marc and just give him a brother hug. I was so grateful for his being. He was great. Its such a weird kind of public thing where people are waiting in line to see him but real stuff finds a way to come through anyway, and people give a little space for that. He said, "We gotta have the talk sometime not now, its been quite a two years. I'll tell you later." He asked how I was, and I told him I'm really enjoying music, and he said, I know, I know, I see it, I'm sorry I just don't have time to tell you." I so understand, and really its one of the great pleasures of going to these concerts just to feel a very brief moment of excitement and reconnection, that feels completely sufficient even as a 2 minute glimpse. Who knows, maybe that's one of the reasons he does meet and greets, to catch up.  I could have tried to hang out longer, but I'm real big on savoring the hell out of what was offered without making anybody sorry they were so nice to me. I bet he could get an excellent song out of things that happened tonight, including the bizarre bit about getting stung by a bee on stage, and being o.k. but surprised by this.  Even if he doesn't write this into a song metaphor somehow, I might.

Posted by Michael Silverstone at 5:01 AM