Our chill and sweet band, the SilverTone5 has emerged through a beautiful organic process that has at times driven me to madness and despair with its sadistic slowness.

In the beginning was David, my everyday kind of real-life friend, who at one time was someone I'd get together with to throw a baseball or talk about movies, with no thought of music, and who happened to be a guitar playing master craftsman. One day we picked up some guitars and he said, "Why don't we jam regularly, its good for me to get back in this."

. . .Then came Robbie Lloyd Henderson, at first as a banjo player (!?) (did that really happen?), who bought himself a bass and an amplifier and settled in, though he is also a great lead guitarist and songwriter, among other renaissance talents.

. . .That's how it was for a long time, just the three of us, but then jazz, rock and soul diva Kristie arrived like it was always meant to be.

. . .and on the day of the session below, Laura Mustard -- a musical energy phenomenon, songwriter, performer and rock and roll animal, agreed to sit in on drums, and  because she was secretly a long-time brilliant percussionist among her many more obvious creative talents, she happens to be able to intuit all the changes and fills and build ups, and endings like she's been here all along.

All this came together in a flash while I was all the while writing songs in profusion as if I were expecting the band to appear which eventually did. And on my recordings, my digital alias has always been Michael & the SilverTone5, featuring, at times, a horn section and female harmony singers. All of a sudden, we are this band that seems to have a history and depth that belies the fact that we've only been fully in existence for a week (or 5 years, depending how you look at it), but what a week so far! 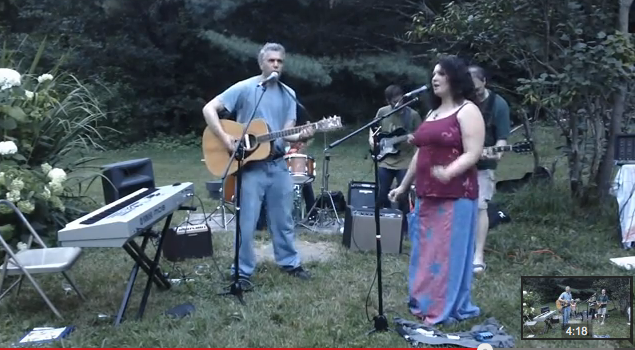 Posted by Michael Silverstone at 6:19 AM