Last month I took part in Frets and Refrains, a gathering of guitar players and songwriters for a week at the Full Moon Resort in Oliveria, NY near Woodstock. There were classes taught by Richard Thompson (I guess Bob Dylan and Paul McCartney were unavailable), Teddy Thompson, Happy Traum, Sloan Wainwright and Martin Simpson. There's a long list of things (guitar playing and songwriting being two) that Richard Thompson does stunningly well, so well as to redefine at a higher level what is imaginable. His teaching is pretty stunning too--in guitar barn lecture hall format with conference time afterwards. 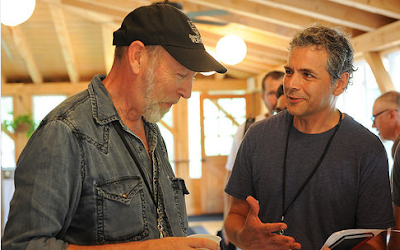 If you had five minutes to ask Richard Thompson something,
what would you ask? I asked about the the derivation and
inspiration of one of my favorite Thompson songs, and about how
he maintains habits of creativity for the long haul.
© 2012 Photo by Anneliese Moyer, Stage Right Photos


Teddy Thompson, who is an outstanding songwriter and supernatural vocalist (taking brilliant and thorough advantage of his linage as son of Richard and Linda) led a songwriting workshop in which he challenged us to write a song under severe limitations. Use only 3 chords, and finish it in 60 minutes or less. Since he seemed so sure it was possible, and I couldn't imagine letting him or myself or classmates down, I managed to do this--in a Dropped-D open tuning that Richard had taught us that morning, using a creative confidence I had gotten from Sloan Wainright's singing class that afternoon, and with Richard's son Jack playing bass and his legendary sound man Simon Tassano working the board at an open mic about three hours after I wrote it.

Here's a video fragment of this same performance:

I wrote three songs during the camp, and recorded them when I got home, and put guitar solos on some of them. Richard had actually done a session on soloing, and you might wonder, since the guy's acknowledged by Rolling Stone Magazine as one of the 20 greatest guitarists in the history of R-r-r-ock, and, I'm not making this up, just recently designated on merit as Order of the British Empire (O.B.E.)  by Queen Elizabeth II for his invaluable contributions to English culture--how could he show you a kazillionth of what he knows that we could walk away with in 90 minutes?

Somehow he managed to do more than this: He offered three observations that will forever change my approach to the guitar. First of all he noted that there are different purposes for guitar solos: ones where you are reflecting the melody with thoughtful intelligence, ones where you are being a bit more introspective and setting a meditative tone, and ones where you just play with passion and fire. (And of course, he said, and then demonstrated, at all times, you want to just shred like this!--not.)

He also said that the idea was to use different kinds of scales in the key you're in, and play something off, or unexpected, but then know where to go to resolve it in the home key. I think I said that right. I sort of know what I'm talking about but don't quote me.

But most valuable of all, he said that a guitar soloist should be able to sing the solo, and translate it into the guitar playing it. Say you're camping with friends, and you start singing a Beatles song, and the solo comes up, but there isn't a guitar for miles around. What do you do? Air guitar. How do you play the solo? You sing it: "You know I believe and how"-- "Ba ba-da, dow, dow, dowwww," (maybe not the coolest example, but the most instantly recognizable).  So imagine you've playing a solo in the studio. You don't know what to play. You can rattle around the box of the pattern you learned from the blues scale book--it will be in key at least--but better yet is to sing the solo, then play what you sung (simultaneously, once you get fluent enough).  It will come out far more naturally and expressively than finger habits will allow. Here's what that approach sounds like on my home studio version of Flying Blind, of which my son, who normally holds standards of cool that I have no hope to aspire to said, "All right, I have to admit that's awesome."

I just couldn't let Richard down. I liked being in his company, too much to fall back to my usual place on my home planet, which is Earth. But I cheated a little on the recording to make up for the fact that I don't actually know how to play like that. I took about 25 tries to do the solo, and inched forward a phrase at a time, then double tracked a harmony that one day it would be nice to play at the same time as the lead line using the Hybrid pick and finger plucking style that Richard was introducing us to. He explained that teaching it in one session was "vaugely impossible" but that he respected us for the effort and added that he would feel badly if we actually succeeded in learning the style instantly, I suppose since it had taken him his whole life to develop it. Richard only uses words for about half of what he says, by the way, the rest is conveyed through inference and demonstration, passionate commitment and frequent humor, which is the same thing he does in his songwriting and guitar playing.

Another song I wrote was a complete surprise. I woke up in camping tent city, the pastoral half-price economy ghetto of the camp (a field with propane heated well water shower hose tents), opened my eyes to a nylon ceiling and had two thoughts: "Huh? Oh, yeah, this camp thing" and "Doon, da, doon, da, doon, da, doon, da". I heard some song in my head and needed to get to a piano or more likely a guitar, but where? The privacy of my 20th Century Ford station wagon with the doors and windows closed turned out to be ideal. With my guitar and portable recorder at my side, I managed to put down the back seat and fashion a provisional field recording studio to observe and capture the wild dream song idea in its natural habitat. The result was this:

It's a very different kind of song than any other I have written. I don't completely understand it, and I like it. Sloan Wainwright called it a "true-blue" song. I sang it in singing class, and couldn't get the phrasing right because it was so new to me, but I sang, "Blah, blah, blah," in place of the words in the final verse, which is one of the techniques she recommends to free your voice. Doing that made the song presentation worse, but the learning in singing class way better.

On the Friday morning of a week I really could not bear ending, the sunshine literally disappeared overnight and it was raining. I began to roll my soggy tent in plastic and decamp, obliterating all traces of where I had been. I'm not proud, but I have to tell you what happened, a sob rose in my throat. I felt like I had finally arrived where I wanted to be--a beautiful community of music and friendship and exemplary teachers that I was inhabiting heart and soul in sandals and short sleeves in sunlight with good food and a creek and swimming pool right there. But I also felt like I was a young child and I had glimpsed and was losing paradise forever, and cruelly, just like destiny demands, I would have to return to the nowhere near paradise world of not-here. (Don't misunderstand, this is no comment on my customary circumstances, but one on the extent of how temporarily and completely happy I was.)  I saw a classmate, he had come from thousands of miles from Hungary to take part. I said, "They shouldn't have made it rain this morning. I feel like in 30 minutes, music is going to end forever." He smiled and offered a kindly reminder, "Dude, music will go on."

That's how I got my third song, as if to prove that true: 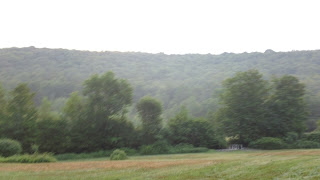 View from the field where campers woke up in the morning.

Link to this song:

Link to the album I since decided to release: (my first)

Posted by Michael Silverstone at 8:27 AM