Like a very model of the Buddhist framework of bardo states, the Yellow Sofa Open Mic underwent experiences with striking parallels to the near-death experiences of those who physically died and then experienced themselves floating out of their bodies. 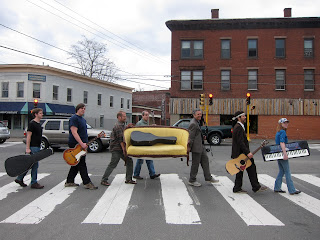 
Throughout the Summer of 2012, the eponymous Yellow Sofa was physically lifted and carried to various locations, including the crosswalk of Main Street, Northampton, 60 Masonic Street, and eventually to the Village Commons in South Hadley, where the legendary Yellow Sofa Open Mic was  reincarnated at the Thirsty Mind Coffee and Wine Bar in South Hadley, MA.

The purpose behind the Buddhist Bardo states after death is to provide the dying an opportunity to become enlightened and attain Buddah-hoood, or if enlightenment is not attained, to secure a favorable rebirth. The first goal will probably take a lot more work than any of us has done yet, but the second was brilliantly realized, as the new open mic has met and even surpassed the original in terms of enthusiasm, energy and quality of performance.

Due to its large and growing popularity,  the gracious Hungry Ghosts at the Thirsty Mind have decided to add an additional night (Friday) which is called "Extended Play," during which performers who participated in the Thursday night Open Mic, can return for a longer and more concert-like set.

While the Yellow Sofa Open Mic is defined by its attentive audience, the Friday night sets provide less- sheltered conditions, as you can see in this video, as attendees from a Mt. Holyoke College lecture about empowering women to go into journalism, crowded into the coffee shop to debrief and laugh about their experiences, quite indifferent to the fact that live music was what brought people into the shop prior to their arrival.

The good news about the bad news, is that performers occasionally get opportunites to practice functioning on stage beyond from the limitations of singer-songwriter vulnerability in the rough and tumble of the unprotected marketplace. Hey, it's good for ya. 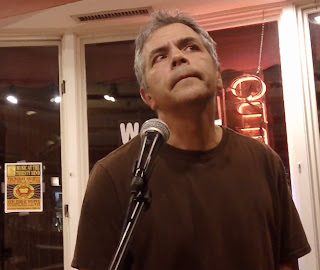 "In developing your ability to perform live, whatever you learn to deal with that doesn't stop you completely make you mo' better, probably," says Michael Silverstone of the SilverTone5. 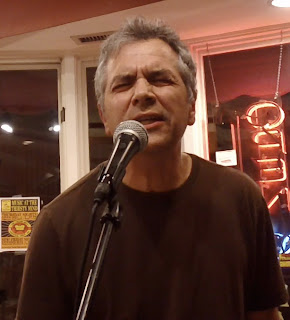 Gimme One Reason (T. Chapman)
http://www.youtube.com/watch?v=OHN0hJeTWFQ
Re-writing my set list on the spot, I employed some degree of calclulation and decided to opened with the one song in my repetoir written by someone widely looked up to by undergraduates at an all-women's college--Tracy Chapman. I drew on method acting stills to convey the lyrics, trying to get the people who weren’t listening to get me to show up to play for them.

Satelite of Love (L. Reed)
http://www.youtube.com/watch?v=dyfG_YXwbpI
“Things like that drive me out of my mind!” Did an experiment where I got real quiet, and raised the piano to a higher octive, and the room got way quieter. Was so happy with it I rocked out at the end like I had a band behind me.

Watching the River Flow (B. Dylan)
http://www.youtube.com/watch?v=cuQ3itH3Qeo
A perfect, “Yeah, whatever, song,” for the occasion.

Anthem  (L. Cohen)
http://www.youtube.com/watch?v=HIWJke5_a2E
A really mysterious and powerful piece of music, and I was thinking about it in terms of this moment in history, not just the moment of me playing music in a coffee shop.

For more about the Yellow Sofa Open Mic including how you can take part, see:
http://yellowsofaopenmic.blogspot.com

Posted by Michael Silverstone at 6:56 AM