In the contract with my record label, they've limited me to releasing no more than 30 songs a year. I've argued with them endlessly, but to no avail. They say its in my interest to have the albums eagerly awaited each year at the holiday season. I tell them they don't understand the songwriting process. They counter that they understand the industry, and are currently repackaging my greatest hits in four albums:

I keep writing and recording new songs and they say:  "Stop. People want to hear the early stuff that defined your sound. They associate it with 2009-2010, a special time in their lives, when we were younger and the world was a more carefree place." I counter, "But this is the best work I've ever done." Wasted words. The head of A and R actually said to me. "That's really not the point. You're killing your brand with overexposure."

Doubtful. But just the same, this industry has chewed up and spit out people you'll never hear of far more talented than I. Reluctantly, I have to suffer the idiocy of their, "legal agreements" in order to receive their "royalty checks" so I can continue to have "lunch".

Perhaps I can't release any more songs until Jan 1, 2014 but that won't stop me from sharing these tracks by my latest discovery and protégé, the very talented Mark Zimmerman: 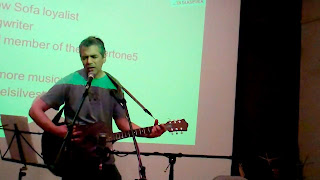 Over You:
It's been called Everly Brothers Redux. (It's rumored that that's me on harmony, not true.):

Earth Survey:
A Speculative Science Fiction song from the perspective of an earth-colonizing super-being:

Rest
Tried to make it as purdy as I possibly could :
http://michaelsilverstone.bandcamp.com/track/rest

Hope you enjoy these, and and in so doing, stick it to the man.

Michael
Posted by Michael Silverstone at 4:17 AM