In a world trying to rise from the ashes of post-industrial decline. . . a song Ripped from the headlines. . . 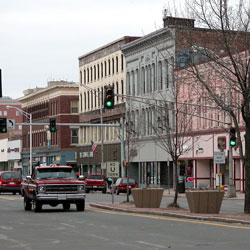 Pittsfield, MA, one-time home to General Electric, has been trying (and succeeding) to reinvent itself as an arts mecca.  Asked by absolutely no one, I created this theme song for the cause.

Unable to get the  headline of the local alternative arts tabloid this week out of my head ("Pity City No More") I may have made matters far worse by making it the hook of this song:

Special thanks to the SilverTone Horns featuring Eric Blair on trumpet, Norm Chomsky on coronet and Bernie Schwartz on Trombone.
Posted by The Yellow Sofa Open Mic at 6:57 AM