Mr. Silverstone and the Foregone Conclusions Show Show Tonight at 6:30-8:00 @ the Yellow Sofa

I had booked a spot at the Yellow Sofa for tonight (Sat. July, 16tth @ 6:30 p.m.-8:00) but my usual backing band, the Silvertone Horns, could not make it due to mandatory vacation time they had to take to recover from the rigors of our incessant and punishing rehearsal and recording schedule. 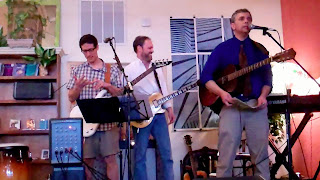 So like they say at discount fire sales, "Our setback is a bonus for you, the customer." Instead of putting an ad in the paper in the slim hopes of finding and rehearsing with a new schoolteacher/bass player and attorney/lead guitarist in time, I called in some favors and got the very best unattached rock and roll wrecking crew in the valley, The Foregone Conclusions, with Ray Yelle on Percussion, and the Moushabeck brothers, Ramzi and Simone who take turns playing killer bass, guitar and more as the situation requires. They are hands down the most talented musicians young, old or in-between to be found anywhere, or, more to the point, in my rolodex. In case you suspect this whole referring to myself as Mr. Silverstone thing is a spoof, I first met two of the three members of the crew, like, for real, dude, when I was their 2nd grade teacher, a fact that you will quickly find surrealistic when you hear how seriously, precisely and assuredly they rock, like well-brought up, considerate, assassins.

Why just yesterday we were in the studio recording tracks for the next Mr. Silverstone album. In the video above, and you can see a glimpse of the monster talent Ramzi commands as he adds lead guitar licks to the outro of our climate change balad "The Ice Age Hotel" while our studio producer Jim Matus oversees the recording at the Old Schoolhouse Recording Studio in Hadley, our home away from home. There will be an advance 3-song EPs will be available at the gig tonight for the lo-lo price of $5.00. You can also listen for free, or download for a fee, at the URLs included below for thee:


Proceeds to go to The Foregone Conclusions who were never in it for the money, but wouldn't mind it if their fans showed the love.

But wait, there's more! This concert will feature massive audience participation as a parade of beloved Yellow Sofa frequent performers will join me for duets on our favorite cover songs, many of which we've actually rehearsed harmony parts for.

Just to give you a flavor of the show, we now include and conclude this blogcast with a video recorded back on Thursday. Hope to see you there, or that you can experience the groove virtually or actually. Wishing harmonious vibrations and dissolution of limitations across all superfluous boundaries from all of us (all one of us at the moment) here at Mr. Silverstone's music funhouse.

For more videos of recently written and performed songs, see the MrSilverstoneMusic channel on YouTube:

Posted by The Yellow Sofa Open Mic at 4:26 AM